Yesterday, while in Nottingham, I visited the Nottingham Contemporary gallery to view the current ‘Star City‘ exhibition that celebrates ‘The Future Under Communism’. Good it was, too. And free.

Running until 18 April 2010, the galleries features the work of artists from the former Eastern Bloc. The installations range from ‘Star City’ itself – a 4 channel video presentation of a secret location near Moscow, where you witness the ruined remains of the Russian space race, including the practice modules used to train cosmonauts and the tattered, once luxurious accommodations around the facility – to a plentiful supply of propaganda posters of the era. One poster features smiling children, marching for the great cause clutching rabbits, flags and a basket of yellow chicks, proclaiming “Let’s Be Deserving Sputniks of the Seven-Year Plan.” Others proclaim “The Creative Forces of Communism are Endless!” or that a “Soviet Artificial Planet Runs Around the Sun in Honour of the XXI General Meeting of the Communist Party of the Soviet Union, 1959” – with supporting images of Russian rockets and heroic cosmonauts.

One wall features various proclamations and declarations around the great future that lies ahead under Communism, with an interesting timeline of developments from the end of the 1960s through to 2100 that singularly failed to deliver beyond 1969 – after which there should have been communication with dolphins, creation of artificial lifeforms, perfect weather control, bases on the Moon and Mars, and generational voyages beyond the Solar System (half of those I’ve listed fell in the timeline prior to now).

Some of the more ‘interesting’ installations include electrical appliances running on a variable current staggered by a morse code rendition of a Fidel Castro speech, a modular cinema – including integral seating arrangement – made out of wood and cardboard tubes, and images influenced by Stanislaw Lem’s “Solaris”.

Undoubtedly, the most impressive works for me had an incredible sense of mechanisation in decay. One, an as yet untitled work by Robert Kusmirowski, was a 1:1 scale replica of ‘futuristic’ machinery and control interfaces from facilities long since abandoned, a wall of dark green metal scabbed with rust, with glass-faced dials and great metal switches. 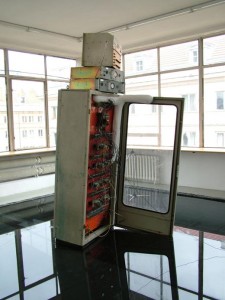 My personal favourite was “Elsewhere” (2008) by Micol Assael, a cabinet of electrical components, the door swung open and the unit leaning forward, sat at the centre of a dark pool of water. Live with electricity, microphones picked up sizzling, crackling and bubbling, as water trickled occasionally from long thin pipes extending from the top of the cabinet. Bizarrely brilliant.

While the whole ‘Star City’ exhibition provides an interesting source of imagery and perceptions for use in PARANOIA, I think “Elsewhere” alone could make for a great encounter. Imagine, the Troubleshooters enter a room to find the middle of the square space dominated by a towering stack of crackling machinery and the recessed floor filled with water. A strong smell of ozone fills the air. Near the stack lies a body, lying on one side in the water, dressed in a full body suit, shining gold in colour. The team have been told to come here, so they believe they have to do something. However, touching the water deliveries a powerful shock… so, what to do? In fact, they’ve been sent to the wrong place and this room contains an artistic installation funded by a slightly ‘touched’ ULTRAVIOLET. The artist is in the suit, but the material protects him from the electricity. A slave to his art, the guy has simply fallen asleep in pose.