Discussion about the whole business of mutant powers and secret societies came up during the demo sessions at Consternation, a couple of weeks prior to official release of the PARANOIA Mandatory Bonus Fun Card Game. As it stands, neither feature of the roleplaying game makes an appearance in the card game.

On one level, this makes sense. When you sit down to play the game with a few friends and a full set of clones, you could be looking at more than an hour or two of play time. Adding mutant powers and secret societies would potentially make the experience even longer. You might think this no bad thing when you have the time, but at an introductory level it would probably prove too much. If you add a lot of extra details to the card game it removes the beer and pretzels simplicity of the “out of the box”™ game.

I have every intention of exploring the possibility of adding both mutant powers and secret societies to the game using some form of mechanic, yet undetermined. One we discussed during the demo resembled the Vanguard supplement for the Magic card game (designed by Allen Varney), enhancing the base abilities of each Troubleshooter at a cost to Wounds, Treason or Hand Size.

In the meantime, this card comes from my own playtesting, but failed to make it into the final set. It offers a flavour of mutations without delving into a massive new mechanic.

So, here’s the card: 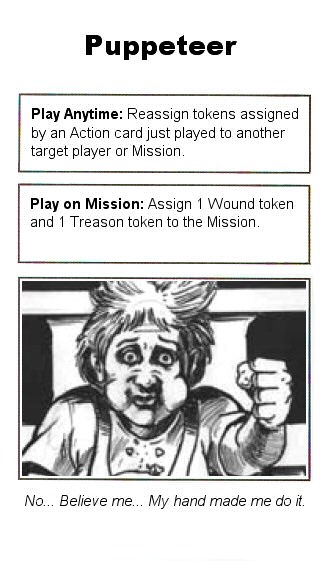 Just print out the card above and cut to fit one of the blank cards supplied with the PARANOIA Card Game. Then stick it on with paper glue.