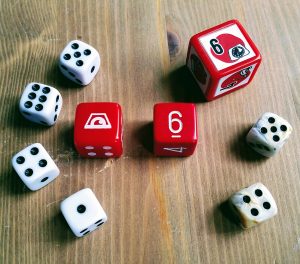 Guess what arrived in the post yesterday (while I was out).

I have the newest edition of PARANOIA in the house, from the fine folks at Mongoose Publishing – and you can expect many posts to come in the near future (and beyond) as I wrestle with this Brave New Complex.

It seems sensible to go through the core game component by component. Shall we start with the dice?

I have read various posts about the core set and I can see why the dice might not impress.

The game comes with four small white dice and a larger red die. They all come in a little zip-lock baggie.

I have taken a picture to compare them with some other dice in my collection.

The red die has transfer faces – so, nothing etched or moulded into the surface. The Computer that replaces the 6 seems a little small to me – and, oddly, I think I would have preferred numbered faces rather than dotted. 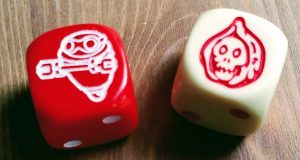 I think it would have been nice to have a moulded die – as much for aesthetic and accessibility, because you’re going to struggle to read the dice if you have issues with your sight. I have seen many smaller companies put some nice dice with their game with logofied single faces – and given the mass production, I daresay it would have been a manageable expense.

I have a large die I used for my own home grown PARANOIA game (top right) for comparison, which uses recessed faces with printed stickers… and also has the brooding eye of Our Friend Computer on the sixth face.

The red die also seems quite rounded about the corners and edges – here in comparison with the other red die, which comes from a Chessex polyhedral set (middle right). Admittedly, neither ranks against a poker die for sharp edges. The PARANOIA die appears to be slightly larger and ever so slightly rounder.

The white dice are small and sort of look cheap. They feel OK, but something about the close format of the dots on the sixth face reminds me of the cheap plastic dice you get in pound store boardgames.

I have some Chessex dice about this size that I tend to use for games that need a lot of dice rolled – especially where rolled at the same time. I also have some nice examples – like those in the picture (lower right) – that I use for Dragon Age. They match for weight and rounded tumbled edges – but the dots are consistently spaced on the faces. I don’t know, something about the 6-face on the PARANOIA die just keeps niggling at me.

I haven’t got far with my reading yet, so I don’t know why we have two different sizes of die. A consistent size would have looked better and if you have to roll more than one type at the same time, would have felt better in the hand.