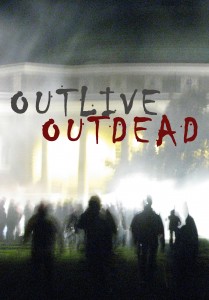 Ah, the delights of writing up a session report. I appreciate the need to get it done as soon as possible, but now – more than a week later – I shall need to dig into recent memory. I know where we started each time and where we ended – but the details inbetween might begin to merge.

Mind you, I can’t manage the session report right now. I just wanted to make it quite clear that one will follow. Well, two will follow, as I have this Monday’s session to write up as well.

To rewind a little, I have run three playtest sessions now for the as yet unpublished, but available, Outlive Outdead roleplaying game. In OO, you play survivors of the a zombie apocalypse. You might think you have heard that before, but OO approaches this from new angles (you can get a short sharp review of the system by downloading the Quickstarter). You have mechanics that stimulate and drive a rich group dynamic, supporting character building and relationships through a little incentivising crunch. The game supports a fairly standard dice roll mechanic for failure and success, but adds in the possibility that stress and overwhelming horror might just push you over the edge at any time. Moreover, if you die in the middle of the game, you don’t get left sitting out the session or forced to pick up another character – in OO you have the chance to play a zombie and assist in the downfall of those you might once have considered friends. You have the opportunity to measure success in the number of player characters who fall to the ceaseless advance of your brain munching undead minions.

I have enjoyed running the game and general, ad hoc feedback from the players has echoed the same. They have voiced very positive feedback around the Break mechanic (getting pushed over the edge by the horror of the situation before them) and the potential of the Karma system. The latter allows you to occasionally exercise special abilities that guarantee success, but which other people can tap into too by paying you one of their Karma points. If they pass the Karma to the GM, you get the benefit of the ability. However, they can also choose to double-cross you and keep the Karma for themselves – a move that means the original player can’t tap into the ability, but the character doesn’t necessarily realise the cause of the ‘inconvenience’. In roleplaying terms the other character might look like they simply failed to realise they could help, roamed out of earshot when called, tripped over at just the wrong moment, or whatever. I feel the game system augments the story potential rather than interfering with it.

On a personal level, I don’t necessarily feel that I have provided the greatest roleplaying experience. I have a bit of a character flaw when it comes down to judging myself, as I always err on the side of being a bit rubbish. I certainly feel I haven’t pushed the zombie quotient hard enough, but at the same time if you look at a show like ‘The Walking Dead‘ you can see an example of a zombie scenario where the threat lies as much with the character interaction as anything else. OO’s mechanics firmly support the interplay of individuals.