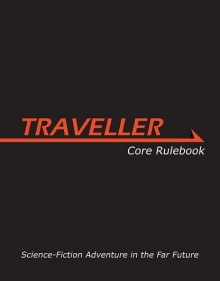 I enjoyed spending three days at Conception this past weekend. I spent most of it on the stall for All Rolled Up, but also had the opportunity to play a couple of roleplaying sessions and a couple of new boardgames.

One thing you get from playing rather than GMing is a little insight into how you run games. The first thing that occurs to me when I play is, “I wouldn’t have done that…” – and this can be both a positive or a negative response.

Sometimes, you have an experience that exceeds what you’d normally deliver, or simply isn’t something you have done or achieved in your game. Some times that can be a style or a technique. Other times, it could be something mechanical or even physical.

I played a game of Traveller.

Constructively, the greatest lesson learned from this session revolved around skill checks. The adventure itself proved rather interesting – a rescue operation that demanded we make some hard choices and threaten our own existence. Familiar tropes like aliens spitting acid and crashed ships disrupting hives – they made the experience more interesting because we expected a lot of what came at us, but that didn’t help defeat it!

However, throughout the adventure we had hints that pirates lurked in the system and they’d damaged one of the two ships we rescued. We kept looking for them, but they didn’t pop up until the end.

After we rescued the crew from the second ship, deep inside the atmosphere of a gas giant, we detached and started toward space. As we thrusted skyward, the GM asked for a Sensor check. The navigator succeeded. A check on Pilot also succeeded. Some narrative colour followed as we described other activities onboard, like the doctor treating patients or my character manning a turret. Then the GM asked for Sensor and Pilot checks again. More colour. More checks. Then more.

In the end I think ten checks in total, across the two skills, in pursuit of a clean getaway.

Now, I’m not a mathematical expert, but I know that probability means that the more you roll, the easier failure becomes. Probability for success becomes smaller and smaller. In many games, the really hard tasks demand many rolls because they’re meant to be impossible (or damned hard), but those rolls represent the stages of effort that go into a protracted task. But, here the difficulty should have been constant – and, in truth, success or failure should have been enough after a single roll to determine the story path.

If the GM wanted us to meet the pirates, a single roll on Sensors and then Pilot should have sufficed. A failure on both and we’re taken off guard and off course. Fail one and succeed with the other, and we meet the pirate either off guard OR off course. Succeed on both, and we surprise them – or they’re way off target as we emerge from the atmosphere and we have time to prepare for them.

If someone with really low (or zero) skill manages to roll a double-6 and succeed, why would you diminish that by asking for four more rolls? The cheer of triumph would soon fall quiet, replaced by muttering and frustrated grumbles. The game should embrace and encourage such moments of excitement, not the diminishing returns of probability and the stumble into failure.

I pondered afterwards how it might have been done in other ways.

Personally, I think the single rolls would have been sufficient. Another approach might have been thresholds or a difficulty chart. The former would set a target number and over five rolls you need to accumulate enough success to exceed the threshold. In the latter, you have more than one threshold and the greater your accumulated success, the more significant your advantage. That means the character with no skill and a lucky double-6 might still manage to snatch some element of success, even if the next four rolls fail or deliver slim successes.

Any other thoughts on how this might have been handled?

Anyhow – I did enjoy the game; I just think that fewer rolls might have made for a smoother and more enjoyable ride. Skill checks do not make for a great game – but, one instead with a greater potential for accidental failure that pick (like worrying a scab) at the skill holes in the fabric of your character’s team.