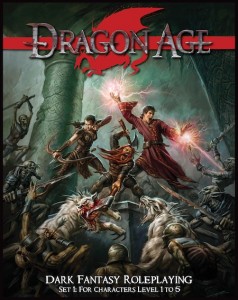 I ran a session of Dragon Age last night, the fourth in a series. We had a ‘filler episode’ last week (as my players termed it) due to only half attendance, so this fourth session took up the main story again, after a diversion in the Fade.

To be clear, the ‘filler’ was always planned as a fallback. I don’t tread water if I can help it. In this instance, I had something specific in mind and we played it out in a single (incomplete) session.

The characters have chanced across a situation where a new Bann has provided protection for the populace, while the old Bann hopes to recover his role through acts of half-hearted bravery on the periphary.

It has more than a passing resemblance to the basic set-up of the adventure from the Dragon Age Gamemaster’s Kit, including the general location and environment. But, I have inserted my own elements, obstacles, plot and villain.

While I have players who have played Dragon Age games, I’m not overly bothered with accuracy or adherence to canon. I have set my game in an alternate Thedas, where many facets remain the same, but I have no wish to keep to the letter of someone else’s law. Where would be the fun in that for me, feeling that I needed to pass an exam or something just to run the game right.

I have taken the time to read the game itself, but not much else. I simply haven’t had the free time to get far in the console game. I have read a couple of novels based on the setting and I can heartily recommend the encyclopaedic Dragon Age: The World of Thedas – an enjoyable world guide packed with inspiring illustrations and a handy timeline.

I have an interesting group adventuring through my version of the Dragon Age world. We have a Circle Mage, a would-be Templar, an aspiring Crow assassin, a charming Avvar barbarian, a Surface Dwarf with a dog, and a capable Feralden warrior with a missing nephew.

It’s a good group, still in the lower levels – around Level 2 to 3 – because we’re only a few adventures into the campaign and only one character has played consistently through them all. I also admit to being a little stingy in handing out experience, although I’m doing my best to change that.

I enjoy using the Dragon Age system and mixing up the sessions across combat, roleplaying and exploration. Last night mainly fell into the exploration category. Investigation, sneaking, seeking out some explanation for what might be going on. Next week, I expect all three to come into play, as the villain revealed herself at the end of this weeks session, but I fear the player characters might have to stay their vengeful hand until they know what’s happened to all the missing children…