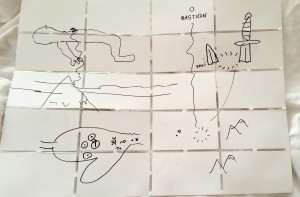 The most interesting (and frustrating) thing I have found about designing adventures for conventions comes down to lack of foresight about your players. You can’t account for the extent of the knowledge.

In some games, this might mean that you run a game with which someone has considerable experience. In the hands of the wrong player this could be a real headache for the GM.

However, my own experience had nothing to do with the game system. My opportunities for a wry grin came about during the course of the adventure.

For example, when I ran Into The Odd, the second part of the adventure took place inside the corpse of a Cloud Giant. I had given this some consideration in advance and sketched out the internal organs with encounter ideas, only to leave the notes at home. The single thing I left at home.

In the face of this, I improvised from memory and started sketching a basic map. As I scribbled the small intestine on the drywipe surface of a Noteboard, I reached a ‘junction’ and heard a slight noise from my left. I glanced up and watched the player sat immediately to my side watching my sketching with interest. He said something along the lines that he wasn’t sure why the intestine would be branching there. I faltered, half-erased, drew the stomach.

Unless, the player said, that’s the pancreatic duct and the bile duct…

I had a vet at the table. Ill-prepared without my notes, I had a player with a grasp of anatomy better than mine even if I’d had my notes.

What do you do?

Well, you do two things.

Firstly, you draw the player in and get them involved. Let them comment and explain, by all means. In this instance, maybe I should have had him map – but, I didn’t really want to get bogged down in the Giants innards.

Secondly, play up the ignorance. OK… this might not be the angle in a serious game, but in one with some humour it works. I had the chance to make this player, and the rest, groan at my ham-fisted efforts to both draw and describe the environment. It didn’t damage play at all, adding to the entertainment and the laughs if anything.

My favourite bit was hearing the groan of dismay when I drew the giant’s heart in a love heart shape. That was funny.

But, that’s the way to go. Engage the player and make use of their knowledge. You can turn their understanding around and use it to colour the game. Don’t allow them to dominate; allow them to become a source of insight, but be prepared to put them in their place. It’s your world – so, if a Cloud Giant has some funny placed organs, then that’s the way it is. Why would a Giant necessarily have all the same internal parts in all the same places?

Roll with the punches. Grasp the bull by the horns. All that sort of stuff.