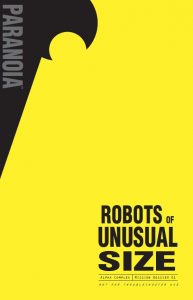 I just finished reading Robots of Unusual Size. I guess that makes this a sort of review. I’d consider it more of a reaction by someone who has both gamemastered and written a fair amount of PARANOIA.

RUS is a 33-page PDF adventure for the PARANOIA reboot – this is Mission Dossier 01, so the cover says – written by M. J. Dougherty. Martin has previously written a metric ton of material for various editions of Traveller, both for Mongoose and the wider Traveller range.

I’m guessing that most people reading this blog will be running the game rather than playing, but I’ll allow players a moment to walk away before I cover anything of the missions plotline.

I mean, the front of the book states quite clearly that it isn’t for Troubleshooter use.

Have you gone yet?

Seriously, Citizen. Trust resides in the iBall of the beholden.

Did you achieve the Minimum Ocular Safety Target?

The Troubleshooters get dumped aboard a slow moving robot transport heading to the Outdoors with only the briefest of briefings. As they go, their mission seems to evolve – but it would seem something lies at the end of a very long tunnel traversed as immensely slow speed. Once Outdoors, the Troubleshooters find something quite unexpected, while also not going completely mad due to experimental drugs. The outcome of the mission pretty much flies out of the Troubleshooters control, as the Armed Forces arrive following identification of a (very long term) threat to Alpha Complex. Debriefing follows.

Why, given that the GM handbook says (on page 10):

Would you immediately take the Troubleshooters Outside?!

As a first “not in the box” adventure, this was a very odd choice.

To my mind, what lies Outside is a tool that the GM can play with to make the setting their own; it defines their Alpha Complex. If you want YOUR Alpha Complex on the moon, under the ocean, on the Starship Warden… Wherever… That’s your prerogative. In this you have your chance to stamp your personal DNA (Ick!) into the heart of the game.

Personally, I suggest that you don’t take the mission Outside.

Where should you take the Green Clearance Machine then?

Well, the ruined outskirts of Alpha Complex and the cleared land around the edge would be huge. For some reason, I had the movie Logan’s Run in my head here, as they push into the shattered and derelict zones. Imagine losing track of the core Complex on the horizon and still not finding an “edge”. Wouldn’t that be mind boggling enough to warrant a dose of tranquillisers?

Horse Farts: Personally? I would lose all the horse fart jokes. They aren’t funny and they suggest a level of awareness about something of which neither players nor characters might have a grasp. I think you want to set a stage where the Alpha Complex encompasses something almost alien in its naivety of Old Reckoning concepts or the Natural World. I mean, what is a horse anyway?

Sheep: After the fantastically “in your face” picture at the start, the sheep amount to nothing. Make the sheep — who really didn’t feature — mutated Giant Woolly Rats or something. Giant Electric Angry Woolly Rats — with Automatic Absolute Destruct-o-Cannon mounts.

Or keep the sheep. I mean, sheep are great. Evil looking things. But, aside from being a MacGuffin to get the mission going, they don’t feature in RUS except in passing.

I mean, if you feel up to it, make more of them. Make the sheep sing, so to speak (literally and figuratively, if you feel inclined). Turn them into an objective or a sub-mission.

Secret Societies: As someone else pointed out on another forum… No Secret Society missions or Accomplishments outlined seems like a missed opportunity, as many newcomers to PARANOIA will be wanting to find more guidance in where to go with these. And having read through the whole Mission Book and this adventure, no one has taken the Bullbot by the horns and written anything about it.

Like motivations, sub-quests and rumours in Other Less Fun Games, you need to give Secret Society missions a little thought. Or none at all — rolling them completely at random. Else, you could just give everyone the same mission and see how that pans out.

Alpha Complex Local History Research Group: You’re heading into the Unknown and that means Dead Zones. We need you to use this [DEVICE] to octangulate the position and then communicate it back obfuscated in reports filed with The Computer.

Anti-Mutant Group: Evidence of mutant agitation on the frontier would be a strong argument to transition Armed Forces out of GTZ Sector. If you can find a way to fake an atrocity or some evidence of ravaged defences, with solid iBall feedback and witnesses…

Death Leopard: Rewire the PA system on your transport and channel your cell’s best noise to the soulless rubes on the outskirts. The citizens in the edge lands are so square, you have to find an angle on converting them… An angle, right? ANGLE! RAAAAAAAAAAAAAAAAAAAAH!

And so forth. You get the idea.

How do they get these missions from their cell leaders, secret contacts or shadowy middle citizens? Easy. The mission vehicle is running at strolling speed.

Glider. A mid-size drone with a technician strapped underneath floats lazily alongside the Green Clearance Machine’s antenna array. She claims to be a Technician and will insist she speak to each team member in person, and private, to discuss a small issue with communications.

Crash. The shattered wreck of a trans-bot sits smoking just off the route of the GCM with a YELLOW Clearance citizen working under the hood. He seems to be reluctant to ask for help, but will make a signal to draw one particular Troubleshooter into some close assistance for a few minutes.

Scrubbing. The Troubleshooters notice a bot following the GCM, apparently cleaning up the track marks and occasional oil patches left in its wake. The machine diligent and keeps following, yet follows a very strange pattern of behaviours that might catch the interest of a team member.

Acronyms – The mission is replete with nonsensical acronyms. While the horse farts didn’t work for me, I really found these highly amusing because they will annoy many players to distraction. Lingering grammatical torture of the most hideous kind, not far short of abused apostrophes’.